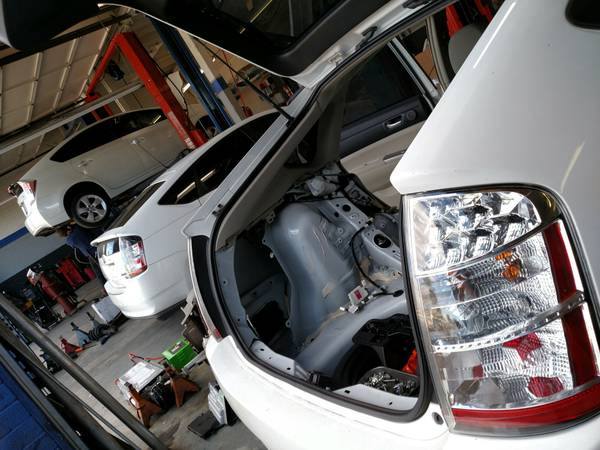 The development of the hybrid car is without any hesitation a captivating one, but it has also taken several lengths of centuries, this is the very fact that many people are surprised to find out about. The main initiative behind the first hybrids has to do with the use of steam as a power source, and cars can attain speeds of a surprisingly six miles per hour.

In 1839, Robert Anderson, residing in Scotland invented the very first car that was powered by electricity. Dr Ferdinand Porsche in Germany, fifty years later created his very first car which he named Lohner Electric Chaise, and also happened to be the first front-wheel car the first of its kind, which could travel up to 40 miles when powered with just a battery alone. There was a boom in the production of hybrid vehicles during the 20th century in the US and as chance would have it, Henry ford with the initiation of gasoline, there was a decline in the production of started engines which actually could be produced in mass on assembly lines. And when he was able to make an improvement on gas engines, which was mainly reducing the offensive smells and loud noise, the electric vehicle dwindled in production in the automobile industry. In 1970, the price of gas was on the high, and once again there was renewed interest in the electric vehicle.

In 1980, when environmentally friendly initiatives came up to be a top priority, several automobile companies tried as much to develop their own hybrid cars, but, unfortunately, there was none of them that could survive for as long as our fast moving civilization would require. However, in 1992 Toyota declared their plans to build a car that would produce the minimal possible emissions which would be ideal for the environment. Hence, moving forward from the period of creation of the ford automobile company close to a century later in 1994, the Toyota motor management, asked their engineers to produce a car that will combine both the use of electricity as well as gasoline, but this also doubled the fuel market. Not until three years later, the Toyota Prius was unleashed to the Japanese market. This happened two years ahead of the original time frame and sold up to 20,000 cars in the first year.
Moreover, in 2000 Toyota launched Prius to the world, which made it the first four-door hybrid car available in the United States. In 2004, Toyota Prius became so popular to the extent that there was a six-month waiting list for people who wanted to buy the car, and Toyota announced it to be the best-selling car they ever had.

However, Toyota which is one of the Japanese prominent vehicle companies recently launched the latest edition of the Toyota Prius. After it was first introduced to the world in 1997, and since then has made serious improvement ever since. Prius did not come into the US market until 2001, although it was first introduced in 1997 to the world. Meanwhile, the most recent model is to make the next giant step in fuel effectiveness by building an eco-friendly plug-in model which is known as the Prius PHV (Plug-in hybrid vehicle). In addition to other hybrid vehicles, the Toyota Prius has a special powertrain that utilizes the outright combination of an electric engine with a gasoline-fueled engine. This vehicle has outstanding characteristics and is at a reasonable price and has become popular over the years.

If what you are looking for is a dynamic technique, spacious interior coupled with advanced technology and low-fuel consumption then the Toyota Prius is what you need. This vehicle is more proficient, accommodating, powerful and responsive. As it moves along the road craftily and you can actually say it’s a dream when handling this vehicle. The basic Toyota Prius model has a 1.5 liter 4 cylinder, though it comes with additional buying incentives which can help you save some cash from the normal purchase expenses. However, in addition, includes a front wheel drive, an anti-locking brake system, front ventilated disc brakes, solid rear disc brake, the temporary spare tire just to mention a few.

In contrast, the new Prius PHV has not much different from the normal Prius, the Prius PHV possesses an essential and all the same a dynamic feature which makes it environmentally friendly. This includes a lithium-ion pack, which helps the car’s battery to get fully charged within a period of not more than three hours and also more powerful. Lexus hybrid models and Toyota can still make use of the lithium-ion batteries in the nearest future. One of the striking differences that distinguish the PHV model from the standard Prius is when powered by electricity it has the ability to maintain speeds of up to 62 miles per hour. The Prius PHV can travel up to 13 miles solely on electricity. Toyota is definitely using this limited plug-in model so as to be able to assemble information from the real world if a 13-mile range is enough to satisfy customer’s needs. Furthermore, the energy lost as heat has the ability to transform into electricity through the use of an energy-renewing braking system.

The Prius car due to its durability, safety and comfort, and ability to cover long distances makes it a perfect fit for a family car. The vehicle’s acceleration is quick due to the fact that it can go from zero to sixty in 11.3 seconds. The Prius vehicle is not designed mainly to be a charming car to drive, or a flashy car, but rather an affordable automobile with utmost fuel efficiency. Hence, the powertrain which has the capability of releasing 98 horsepower (HP) along with 105 pound-feet of torque and a 1.8-liter gasoline engine design, which outrightly combined with electric motors. Cars like Toyota Prius definitely have a brighter future as technology continues to advance.

About the Author: Neil Geesey